Housing affordability best in 12 years thanks to low interest rates

Although there have been big price rises low interest rates have kept homes relatively affordable, according the HIA-CBA index. Despite surging house prices, housing affordability has risen to its most favourable level in 12 years in the first quarter of this year, thanks to record low interest rates, a survey has found.

The HIA-CBA Housing Affordability Index improved by 2.1 per cent in the March quarter and chalked up a 10.8 per cent annual rise. 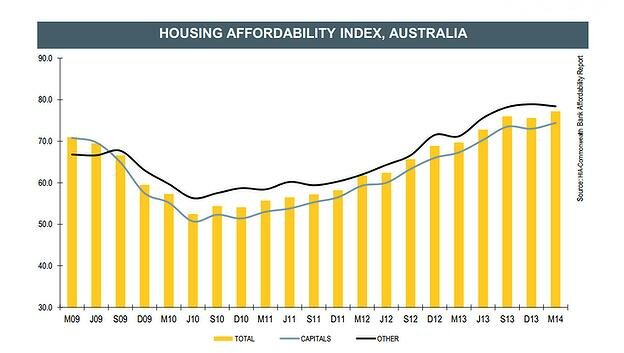 The index measures a wide range of factors of which house prices are only one. The other major factors are interest rates and incomes.

“Increases in home prices over the past year have been significant,” said HIA economist Shane Garrett.

However, the impact of lower interest rates and continued earnings growth has ensured that home purchase affordability has improved over the past year for existing home-owners and those on the cusp of entering the market in the short term.

“We’re talking about house purchase here, and at the moment its easier to purchase.”

The Reserve Bank of Australia has signalled that interest rates are set to remain low for some time.

“Affordable in our market? Not really,” he said.

“It’s tough out there at the moment, whenever something decent comes up there is a lot of competition.”

The data tells a different story to those released by the RBA last week, where the ratio of dwelling prices to incomes were shown to be at their highest levels since 2010.

In 2010, this resulted in a home value retrenchment of 8 per cent.